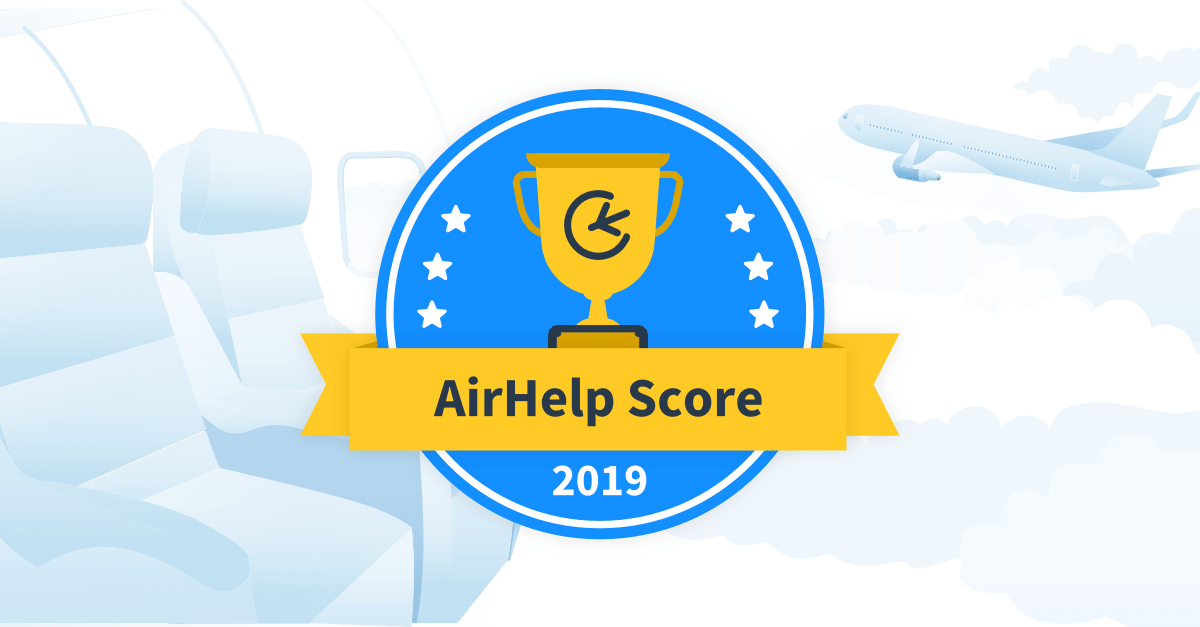 NEW YORK – May 9, 2019 – Today AirHelp, the world’s largest organization for air passenger rights, is announcing the results of its annual AirHelp Score which rates global airlines and airports. First launched in 2015, AirHelp Score is the most comprehensive data-based evaluation of airlines and airports, rating them on service quality, on-time performance, claim processing and food and shops – taking into account flight and after-flight services.

To create this ranking, AirHelp has used top data sources, including its database of flight statistics, which is one of the largest and most comprehensive in the world, tens of thousands of customer opinions and its own experience in helping 10 million passengers around the world process compensation following flight disruption.

The highest rated airline in the 2019 AirHelp Score rankings is Qatar Airways, which has successfully held its top position since 2018 due to consistency in effective claims processing and high punctuality. Specifically, Qatar Airways scored 7.8 for claim handling and 8.4 for its on-time performance. Other than Qatar Airways, a major shift occurred among the rest of the top five airlines; American Airlines, Aeromexico, SAS Scandinavian Airlines and Qantas ranked second through fifth, which showed significant achievement in claims processing and punctuality.

While the top five airlines scored well in passenger-focused areas like claims processing and punctuality, several of the lowest rated airlines, including Ryanair, Korean Air, EasyJet, and Thomas Cook Airlines, made headlines this year for mistreatment of passengers. For example, Ryanair’s staff went on strike, causing countless disruptions, and then the airline refused to pay out the compensation that passengers were owed. This shows that poor passenger support when flight plans go wrong will show in poor rankings.

‘’The 2019 AirHelp Score proves that airlines with higher passenger satisfaction provide more than consistent punctuality. We need to keep in mind that airlines are dealing with a new type of traveler: educated, increasingly aware of her needs and rights, and able to choose between a broad range of air carriers. It means that even those airlines which cannot keep their punctuality high have a chance to keep passengers connected to their brand by providing a positive after-flight service when their travel plans go wrong. Our study shows that airlines that put passengers first and hold themselves accountable by executing the rightfully owed compensation claims quickly and without hassle earn customers’ trust in this highly competitive market,” said AirHelp CEO and co-founder Henrik Zillmer.

“It is clear the global airline industry is in need of significant improvement, with overbooked flights and cancellations making national headlines month after month, and the consistent mistreatment of passengers,” said Zillmer.  “Although most U.S. airlines and airports rated well this year, there is still a lot of work to be done as more than 90% of U.S. travelers are still unaware of their air passenger rights.”

How the airlines and airports are rated

The 2019 AirHelp Score marks the company’s eighth report since it began evaluations in 2015. AirHelp developed this report to combine expert knowledge and industry expertise to give air passengers better predictions for what their experiences will look like at different airports, how the airlines will treat them under normal circumstances, and what to expect if their flight gets delayed, canceled or overbooked. To determine the airline rankings, AirHelp rates airlines equally on three areas, including claims processing, on-time performance, and quality of service. Airports’ scores are determined by on-time performance, which accounts for 60% of the score, and then quality of service, which is 20% of the score, and food and shopping options which makes up the remaining 20% of the score. To view AirHelp Score in full, please visit AirHelp.com/AirHelpScore.

Air passengers who have experienced a delayed or canceled flight can check their eligibility for compensation free of charge, and make a claim in a matter of minutes through the form on www.airhelp.com.

AirHelp is the world’s largest organization specializing in air passenger rights, helping travelers get compensation for delayed or canceled flights and in instances of denied boarding. The company also takes legal and political action to support the growth and enforcement of air passenger rights worldwide. AirHelp has aided more than 10 million people, is available in 30 countries and has more than 600 employees.