3 Reasons Why US Airlines & Airports Rank So Poorly Worldwide

Blame it on the weather, but US airlines are a mess. Passengers would be wise to avoid flying in the US if they’d like to have an enjoyable experience and also arrive at their destination on time, according to the recently released Winter/Spring 2017 AirHelp Score.

Not only are US travelers held up by overstuffed flight schedules, they oftentimes can’t find a free seat — or an available outlet to plug their phone in — while they wait.

Cue the violins. It’s time to dig into the main reasons why US airlines far underperform in quality and service, on-time performance, and more, as compared to competitors worldwide.

US Airlines – How They Fall Short

It’s not been a banner year for the major airlines in the US, to say the least, and the results of the AirHelp Score Winter/Spring 2017 rankings underline this fact. Not a single US-based airline cracked the top 10 list, mainly due to low on-time performance ratings.

In all fairness, United Airlines, American Airlines and Delta all dropped significant percentage points in this score compared to previous years due to seasonality issues — effects of which that are not felt by other airlines in our ratings, such as no. 1 Singapore Airlines.

For example, in Europe, air passengers are well protected by European Commission Regulation EC261, which entitles travelers to be paid up to €600 in compensation for flight delays of more than three hours. On the other hand, US regulations don’t have a lot to say about air passenger rights regarding flight delays. So anytime bad weather hits, it’s a double-whammy: airline performance suffers and passengers lose money.

United Airlines in particular faced frequent dips in punctuality due to winter storms in large city hubs such as Chicago and Denver. The same can’t be said for Delta or American; however, as Delta was rocked by significant power outages at its Atlanta hub, and American Airlines has suffered a long-time downward trend in on-time performance, according to our data.

Sometimes, technical issues keep a plane stranded on the tarmac. This is one area in which air passengers in the US are protected. Airlines are required to provide regular updates, food, water, access to toilets and any necessary medical attention within two hours of the start of the delay. Boarding denials due to overbooked flights are also covered, but airlines must ask for volunteers to surrender their seats before they can start bumping passengers against their wishes.

Amenities Offerings Are a Major Area for Improvement

The winner of the AirHelp Score for Airlines – Singapore Airlines – isn’t resting on its on-time performance laurels, though, as it and runner-up Eithad Airways both rank 10/10 in overall quality. It’s hard to argue with extra-wide seats of hand-stitched leather, ambient mood lighting and a personal chef.

US airlines such as United, Delta and American are struggling to keep pace with the quality and service available on the leading global airlines. Travel blogger Nomadic Matt recently wrote a damning post about United, ‘15 Reasons Why Flying United Airlines Sucks’, citing well documented cases of losing children, kicking service dogs and breaking guitars. So most worrying of all, it’s not that US airlines can’t match their competitors standards, it’s that they’re not even trying.

Why On-Time Performance Is So Important

The AirHelp score is weighted one-third towards on-time performance. We give it this weight because your time is incredibly valuable. Being delayed can have detrimental knock-on effects for people’s schedules, whether it’s business appointments or time with family and friends.

To measure airline on-time performance, we calculate how many flights in the whole examined period ( December 22, 2016 to March 20, 2017) arrived on time. We express it in percentages (for example a score of 8.5 means 85% of flights arrived on time), with a higher percentage meaning more flights are on time. 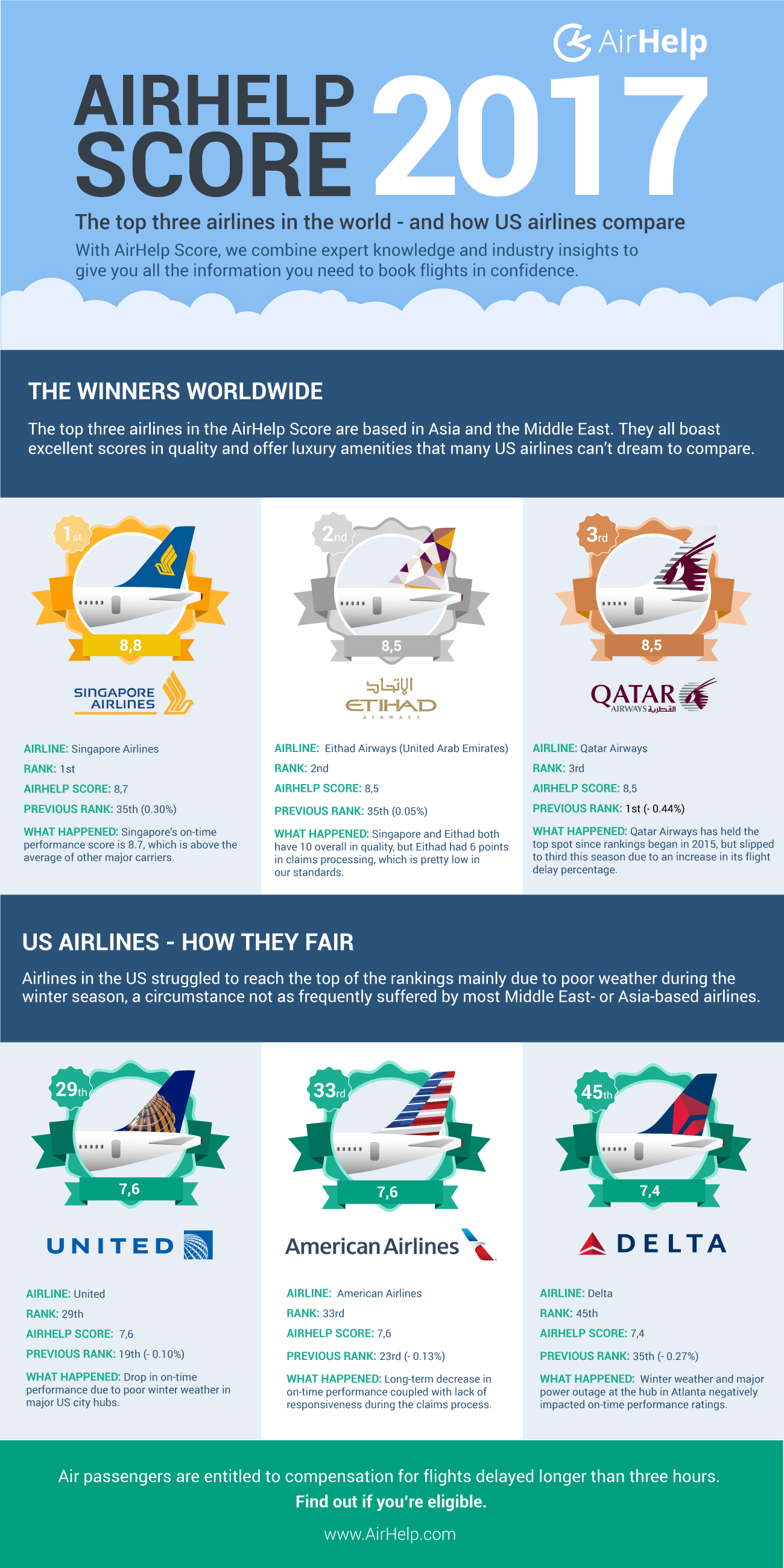