Treat others as you would want to be treated. It seems United Airline’s customer service agents learned this lesson the hard way, after a video of passenger Dr. David Dao being dragged off an overbooked flight on April 9th went viral and caused outrage across the globe.

Less than a month later, the fallout hasn’t abated. After a review of the circumstances surrounding Dr. Dao’s removal from the flight, United today detailed a “system failure” that led him to suffer two missing teeth and a concussion.

They followed up with 10 customer service policy changes to make sure what happened to Dr. Dao will never happen to anyone again.

United crew were strictly abiding by company policies and procedures that day. But this obedience caused the mistreatment in four ways.

If the airline fails to make alternative travel arrangements after bumping you off an overbooked flight, then you are entitled to 400% of the one-way fare price — which could be up to $1,350 in total, according to the law. That’s quite a chunk of change for the inconvenience. United airlines compensation could make the experience much better.

The problem is, airlines want to pack their flights in order to boost their profits. To make sure their flights are as full as possible, airlines often sell more tickets than there are seats on a plane.

This is called “overbooking” and it often results in passengers being bumped or denied boarding for their flights.

If this happens to you, you have multiple rights you should know about. Check out our tips on what to do in the event of a flight overbooking.

Provided your flight is eligible, the compensation amount is dependent on two factors: 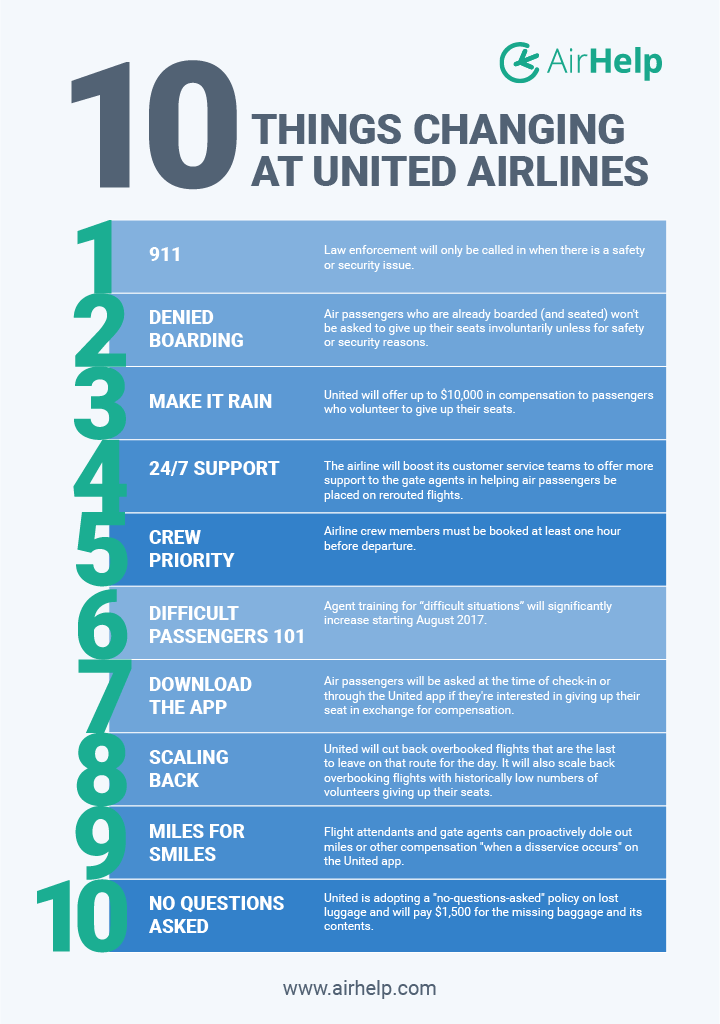 What’s better than $1,300 … $10,000. United has agreed to increase its compensation for overbooking nearly 10x more than required by law to $10,000 for passengers who voluntarily give up their seats in situations such as Dr. Dao’s flight.

Delta recently released a similar change to its service policies and procedures.

Here’s a recap of what United has promised its customers:

Get Customer Service Help from AirHelp

Packed or overbooked flights aren’t the only circumstances when you could be eligible for cash or other compensation according to the law.

Depending on where you’re flying to, you could be eligible for various cash amounts and perks. Read more about your air passenger rights on our Know Your Rights pages or check to see if you’re owed compensation on past eligible flights.