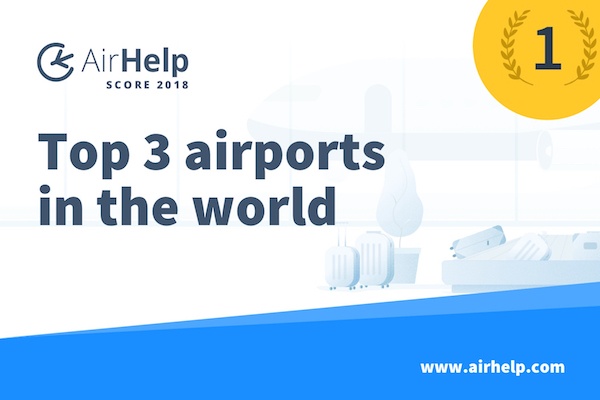 NEW YORK (June 6, 2018) – Today AirHelp, the world’s leading flight compensation company, announces its annual AirHelp Score which rates the world’s best and worst airlines and airports. The 2018 AirHelp Score resulted in new winners for airlines with Qatar Airways claiming the #1 spot, followed by Lufthansa and Etihad Airways. The AirHelp Score is the most comprehensive and accurate data-based evaluation of airlines and airports, rating them on quality of service, on-time performance, claim processing (airlines only) and online consumer sentiment analysis (airports only).

Making improvements to on-time performance and claims processing allowed Qatar Airways to dethrone Singapore Airlines, which dropped to #4 among 72 airlines for 2018. Worldwide, Lufthansa, Etihad Airways and South African Airways rounded out the top five. Among the top airlines in the United States according to volume of passengers, American Airlines is ranked at #23, United Airlines at #37 and Delta Airlines at #47, which puts United Airlines and Delta in the bottom fifty percent of airlines worldwide based on AirHelp’s ranking. Globally, the five airlines with the lowest ratings include Air Mauritius, easyJet, Pakistan International Airlines, Royal Jordanian Airlines and WOW Air.

“The 2018 AirHelp Score shows that as competition stiffens between airlines those that put passengers first will come out the winners in the long run. For too long airlines have focused on cutting corners and costs without regard to the people they serve. We’re thrilled to see a positive shift in many airlines who are now putting passengers first, and when things do go wrong these airlines are holding themselves accountable by executing the rightfully owed claims quickly and without hassle,” said AirHelp CEO and co-founder Henrik Zillmer. “We congratulate Qatar Airways who consistently puts customers first and has maintained its place in the top three since 2015 and is back at #1 this year. We hope more airlines take note of what these impressive competitors are doing and ensure claims processing and on-time performance improve this year.”

“It is clear the U.S. is in need of significant improvement, with overbooked flights and cancellations making national headlines month after month, and the consistent mistreatment of U.S. consumers,” said Zillmer. “It is no wonder most U.S.-based airlines and airports received poor ratings on the AirHelp Score. It is more important than ever for consumers to fight for their air passenger rights.”

The 2018 AirHelp Score marks the company’s sixth report since it began evaluations in 2015. AirHelp developed this annual report to combine expert knowledge and industry expertise to give air passengers all the information they need to informatively book a flight and feel confident in their choices. To view AirHelp Score in full please visit AirHelp.com/AirHelpScore.

Air passengers who have experienced a delayed or cancelled flight can check their eligibility for compensation on the go, and make a claim in a matter of minutes through the free AirHelp mobile app, available for iOS and Android. Also, using AirHelp’s new tool, travelers can check flights’ compensation eligibility automatically for past and future flights.

Since launching in 2013, AirHelp has helped more than five million people process airline compensation claims worth almost $369 million in total reimbursement. AirHelp has offices across the world, is available in 30 countries, offers support in 16 languages, and employs more than 500 employees globally.