When these flight incidents occur, under a European legislation called EC 261: passengers can be entitled to compensation.

If your flight is delayed for over three hours or your flight’s cancelled, under this regulation you can be entitled to as much as €600 in flight delay compensation.

This claim for delayed flight compensation can also be made for free.

Are you eligible to make a flight delay compensation?

Under EC 261, you are entitled to file a claim for cash compensation if…

Delayed flight compensation: under which circumstances are flight delays not covered under EC 261?

The arrival time is not when the wheels touch down on the runway, but when the plane is parked at the gate and the door is opened.

This can sometimes be a difference of 15 minutes or more, so it’s important to be precise.

How long can a flight be delayed without compensation? Three full hours.

Extraordinary circumstances are not covered.

An airline can avoid liability if the delay is caused by “extraordinary circumstances”.

Does snow count as a ‘serious adverse weather condition’?

It depends whether or not the airline could have prevented the problem.

If, for example, the airline failed to ensure that there were sufficient supplies of de-icer before the onset of winter, it could be held responsible for the delay – especially if flights operated by other airlines were able to depart on time.

Airline strikes do not fall under extraordinary circumstances

In April 2018, the ECJ made a ruling stating that internal ‘wildcat strikes’ by flight staff do not constitute as ‘extraordinary circumstances’.

Therefore, airlines must now compensate air passengers for flight delays and cancellations, when an airline strike is to blame.

Delayed flights: Are all flights covered by EC 261?

Under EC 261, to be eligible to claim for delayed flight compensation EU, your flight route is important.

Almost all routes within Europe are covered. This includes not only EU airspace, but also Iceland, Norway, Switzerland and the so-called “outermost-regions” (French Guiana and Martinique, Guadeloupe and La Réunion, Saint-Martin, Madeira and the Azores, and the Canary Islands).

How much could you be owed when your flight is delayed? 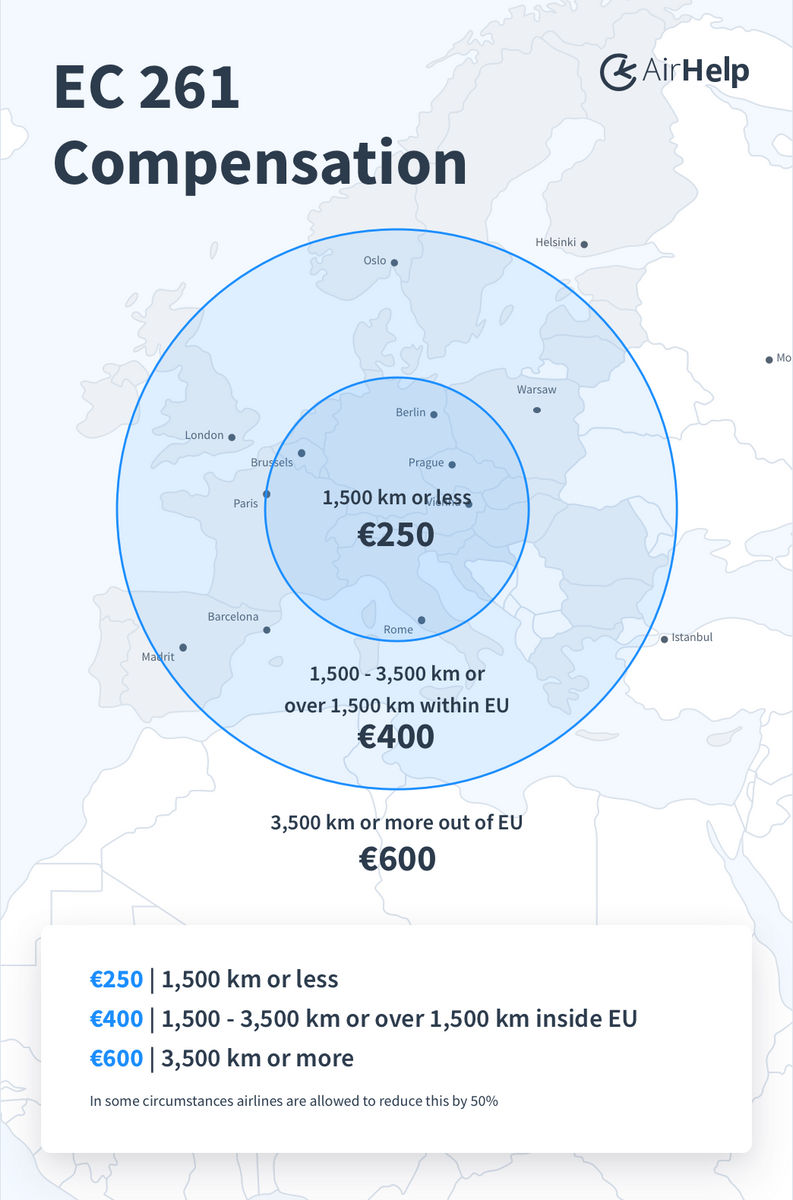 How is the delay calculated?

Factors that affect the amount of your EU flight delay compensation include the delay length, distance of your flight and the exchange rate when payment was made.

It is important to remember that delays are calculated based on the time of arrival, not the departure time. But what exactly is a flight’s “arrival time”?

In September 2014, the European Court of Justice (case C-425/13) defined “arrival time ” to be the moment at which the aircraft has reached its final destination and one of its doors is open.

This is based on the assumption that, at that moment, the passengers are permitted to leave the aircraft.

Also, here we have a free flight delay compensation calculator:

Calculate your compensation for delayed flight for free! Calculate and Claim Compensation

What sort of paperwork do I need for my flight delay claim?

If you’re filing a claim with AirHelp, you just need to know your flight number. If you’re going to file directly with an airline, you can expect some pushback.

Even with EC 261 on your side, they might not be enthusiastic – or quick – about paying you. To give your claim the best chance of succeeding, here are a few pointers:

Flight Delays — how to claim compensation

With a few clicks of your finger, you can transform your delayed or cancelled flight into a reimbursement claim.

After you have gone through our eligibility checklist and qualify to seek compensation, the good news is you can make a delayed flight claim.

Our boarding pass scanner automates and takes the stress out of the compensation claim process for passengers who have been inconvenienced by a delayed or cancelled flight.

We understand how frustrating it is to suffer a flight delay or cancellation and our scanner delivers real-time flight compensation eligibility decisions.

There is no need to manually enter or remember your flight details or booking numbers—just scan the barcode on your boarding pass. After this, our compensation calculator takes care of everything.

After you enter your flight details into our free flight delay compensation calculator, within seconds you are notified if you are eligible or not to make a claim for your delayed, canceled or overbooked flight.

Factors that influence if you quality for compensation and by how much include weather and technical issues.

If the compensation calculator shows you’re entitled to compensation, you are given the option to permit us to start asserting your rights away.

Throughout this process, we give you regular updates to keep you informed.

What impact has AirHelp made so far?

In 2012, a landmark ruling by the European Court of Justice declared that passengers were entitled to compensation for long delays, as long as certain conditions were met.

Following on from that ruling, the floodgates opened for flight delay compensation claims to be made by disgruntled passengers.

AirHelp’s team strives to ensure that passengers are relieved from the stress of making a claim.

We take on the responsibility of enforcing your right to compensation from the airline.

To date, we have helped over 16 million passengers process their airline compensation claims.

Flight delays: what to do

Suffered a flight delay recently? Don’t stress, follow our easy step-by-step guide on how to make the best out of the situation.

How to claim your flight delay compensation with major UK airlines

For the most part, when British Airways cancels a flight, the airline is willing to book passengers onto another flight at no extra charge.

When cancelled flights occur, the BA systems will automatically rebook you. If you decide the flight isn’t suitable or you no longer wish to travel, you can make a change.

We enter the picture when BA cancels a flight but doesn’t give you 14 days’ notice or offer to re-route you. When this happens, EC 261 entitles you to flight cancellation compensation as part of your rights as an air passenger within the European Union.

If you are not sure if you are eligible for flight delay compensation, AirHelp will put you on the right path.

Read more about how we can support you here.

This means you’re likely to arrive at your destination on time. However, there are some routes that are affected more often than others.

If you have suffered a fight mishap with Easyjet, find out how to claim compensation here.

If you’ve experienced flight delays or cancellation with Flybe, AirHelp can assist you in getting compensation.

Just enter your flight details and as long as the flight has been delayed for more than three hours or cancelled in the last three years, we will let you know if you can be reimbursed for your flight inconvenience.

Business travellers and public officials are also entitled to compensation

Many people think that their employer will be entitled to any compensation for a delay during a business trip but that’s not the case.

In fact, it is the passenger who has suffered the inconvenience that is entitled to flight delay compensation, not the person who paid for the ticket.

This is the general principle set out in the EU Air Passenger Rights Regulation for major flight delays, cancellations and cases of overbooking. It doesn’t matter whether you’re an employee of a private-sector company or a public official.

Right to reimbursement or re-routing

In addition to compensation for your loss of time, if your delay exceeds five hours, you are entitled to a full or partial refund of your original ticket and a return flight to your point of departure, if needed.

When you’re stuck waiting for the airline to get you back on track toward your destination, you’re entitled to a number of free perks, depending on your flight details.

The carrier must provide you with meals and refreshments during the delay as well as access to communications, including two telephone calls, telex or fax messages, and emails.

But here’s the problem with flight delay vouchers

Flight delay vouchers are not always what they seem. And of course when you’re tired and confused and someone is offering you a voucher for a new flight, it’s very hard to say ‘no’.

However, you should check that by accepting a voucher, you’re not waiving your right to claim for the compensation you’re legally entitled to. EU regulations clearly state that compensation should be paid in cash, electronic transfer or checks, unless the passenger chooses to accept travel vouchers instead.

Essentially, it’s your choice as to whether to accept the vouchers or not. The data says that most people do.

But you must remember that it’s worth finding out what you might be entitled to if you refuse the airline’s offer and insist on cash instead.

Additional entitlement to food, refreshments and other benefits

If overnight accommodation is necessary, they must provide you with a hotel room and transportation to and from the airport.

If you are offered an alternative flight and are lucky enough to get an upgrade, the airline isn’t allowed to charge you anything extra. On the other hand, if the class of the alternative flight is lower, you can get a reimbursement of between 30-75% of the price you originally paid.

Even if you are compensated under EC 261, this doesn’t affect your right to request further compensation.

This rule doesn’t apply in cases where passengers have voluntarily surrendered their reservations. But bear in mind that the amount you are entitled to under EC 261 may be deducted from whatever additional compensation you receive.

Obligation to inform passengers of their rights

Airlines are obliged to inform passengers about their rights and the content of EC 261. This means that every airline has to display information on passenger’s rights at check-in counters.

You can find the full text of the regulation on this link.

I’m stranded on the tarmac - what should I do?

It’s important to take note of the time when the plane doors are closed. Then, if the wait feels like it’s getting a bit longer than normal, you can measure how much time you’ve been sitting on the tarmac.

If the wait is too long, there’s something you can do.

While supplying air conditioning, access to lavatories and water is mandatory, the law doesn’t require giving passengers the option to deplane until the tarmac delay reaches five hours.

These flight delay rules fall under the regulations for  EU flight delay compensation. Consequently, they apply until the UK officially leaves the union.

Amazing fast service.
Did not know we were entitled to a payment until my daughter told me about Airhelp, Sent in the application received payment within three weeks.
Highly recommended.