How To File a Claim for Airline Compensation

You know all that frustration and helplessness you feel when stranded at the airport? Turns out you’re not helpless at all. In fact, you have a lot more rights than you may realise. You can be eligible for canceled or eu flight delay compensation.

The amount of compensation varies depending on the type of disruption and the route disrupted. But nonetheless, it’s in your power to reclaim the compensation owed to you. Here’s how you can.

At AirHelp we always recommend that you file a claim yourself directly with the airline, but if you don’t have time, or get rejected, we’re here to help.

How to Know if You Have an Eligible Claim

It’s important to understand that you don’t have to be stuck at the airport right now to be eligible for compensation.  If you’ve been on a disrupted flight in the past three years, the airline could owe you money. Unfortunately, that’s where the simplicity ends.

If you’re flying to or from Europe, the law is defined by EC 261 and protects you from delayed, cancelled, and overbooked flights.

The Code of Federal Regulations, Title 14, Aeronautics and Space, Part 250 spells out U.S. traveler’s rights. For flights within the U.S., the only passengers protected are those denied boarding who arrive at their destination over one hour late.

Check out a full breakdown of both laws on our air passenger rights pages or read on for details:

If your flight is delayed or cancelled

The only times you’re not eligible for compensation for a delayed or cancelled flight to or from Europe are:

If you’ve been denied boarding

If you’re denied boarding, the airline could owe you money if you’re flying within the US or to or from Europe:

How to File a Claim for Compensation from An Airline

There are multiple steps to follow when you file a claim for compensation. But before you do anything, it’s very important that you have the items below on hand for every passenger in your claim: 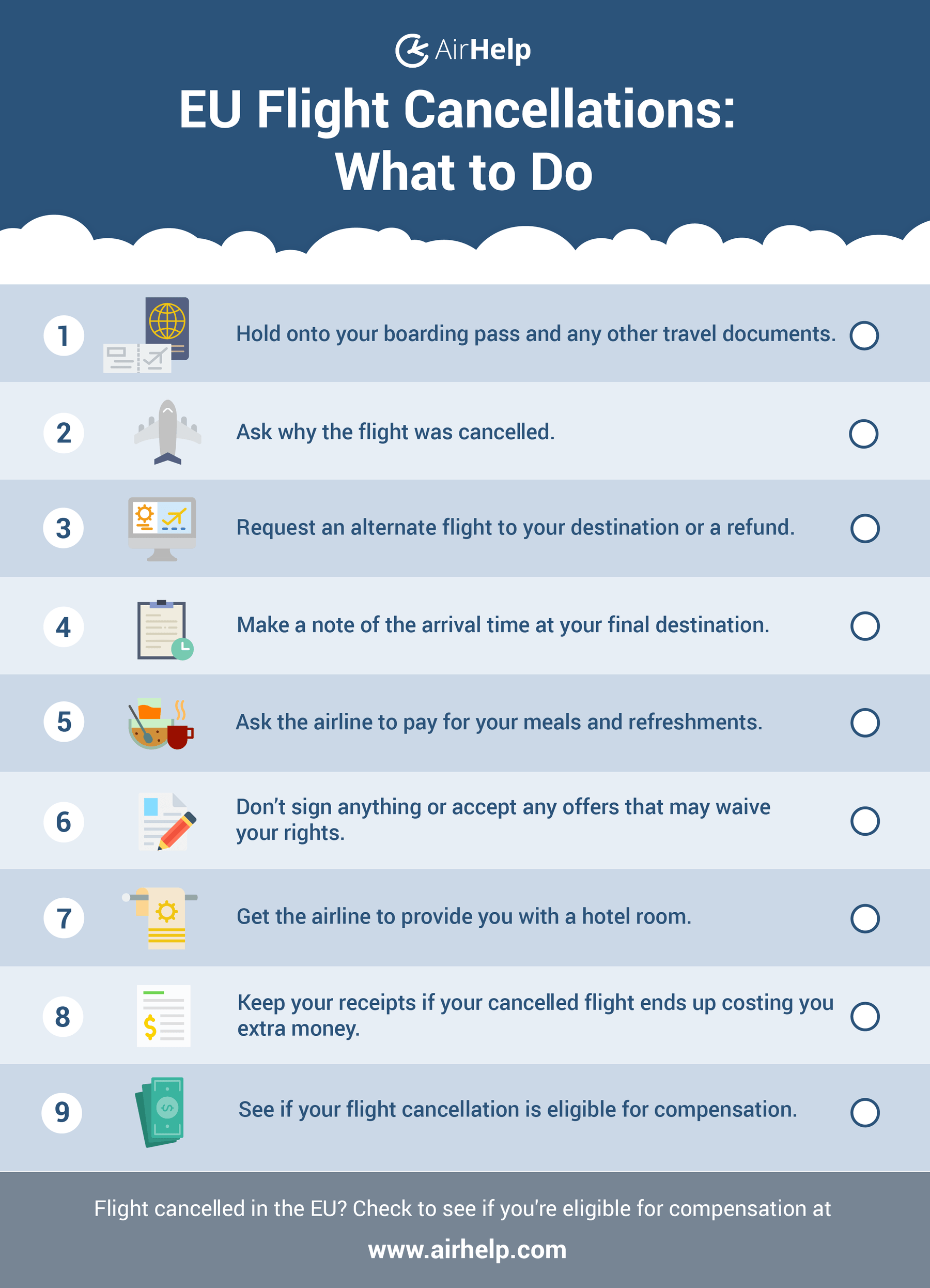 1) File a Claim with the Airline

The first thing you should do when filing a claim for compensation for a delayed, cancelled, or overbooked flight is to contact your airline. You can do this by calling them, writing to them, or asking a gate agent for the best method to file a complaint.

The potential downside: there are no laws requiring the airlines to get back to you. It could take them months to get back… or they might not get back at all. Try this method first, but understand it may not be the last step you take.

2) Take Your Case to Regulators

These websites show phone numbers you can call and have online forms to fill out so you can choose whichever method you prefer. Keep in mind that the regulators are on the side of holding airlines accountable, but they are not law enforcement bodies. Therefore, this is not a guaranteed way to get your compensation.

3) Take Your Case to Court

If the first two steps don’t work, then the final step is to take your case to small claims court. First review your passenger rights to ensure you have a strong case before you waste your time or money taking the airline to court.

Even though you’re filing a claim in court, you don’t need a lawyer. Just be prepared with all the details mentioned above and make your case. The most likely cause of a lost case is if the airline proves that the disruption occurred because of an “extraordinary circumstance” beyond their control. Make sure the disruption that happened to you was one that could have been prevented. In that way you have the highest chances of getting flight compensation eu.

How to File a Claim for Compensation with AirHelp

There’s no telling how long and arduous the steps for filing a claim could be – that will vary depending on the airline, the circumstances for the disruption, and the information you provide.

If you want to file a claim without the hassle, file your claim through AirHelp! All you have to do is submit your claim, enter the details of your flight, and sit back and wait while we do the rest. (We’ll even take the airline to court if it comes to that). We only get paid if you do (35% of the claim if the claim is won).

Fight for Your Air Passenger Rights